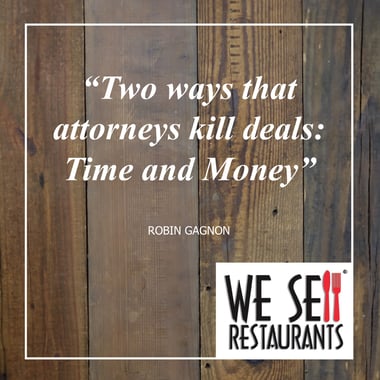 A recent transaction for buying a restaurant reminded me of the two ways that we see deals most frequently fall apart.  Here's a hint -- it's just like all the TV shows where  the criminals stop talking once they "lawyer up".  The restaurant brokers see deals to buy a restaurant hit the same impasse when attorneys enter into the equation.

The first killer technique of attorneys is time.  The time between offer and acceptance is the most critical part of the negotiation.  Attorneys that draw out deals while they draft the perfect contract blow them up.

In one recent transaction, a standard purchase contract provided by We Sell Restaurants (which has been subject to lots of scrutiny in the hundreds of deals where it's been used) went into review with a buyer and seller who both had an attorney.  Two months later, the only progress on the deal was that the two attorneys billed their clients over $8000 and nothing was inked.

Here's how the transaction began.

A very experienced restaurant operator started talking with the restaurant brokers about buying a franchise restaurant in Chicago. Paperwork was signed and he provided us with bank statements showing he had sufficient liquid assets to both qualify for the franchise approval and meet the equity requirement for SBA lending.

For the next six days the restaurant brokers set up meetings between the clients, forwarded financial materials and negotiated the deal terms.  After the first meeting, buyer and seller were happy.  Both parties were in agreement on the price, the closing date and most deal terms.  This restaurant broker prepared the purchase contract and that's when things went sideways.

The seller decided his attorney needed to review the contract.  This is a very common request and should have been relatively painless, except it wasn't.  The seller's attorney demanded proof of funds and a resume on the buyer.  We sent the materials to the attorney with a caveat that the buyer's bank account information was for his eyes only and not to be forwarded.

At this point, the wheels came off as the attorney began having an email meltdown stating he was not willing to "hide things" from his client. We courteously advised him he wasn't asked to "hide" anything but simply to treat the information securely and not forward via a free email service or otherwise expose the client's private financial data to disclosure.

The second way that lawyers kill deals is with money and the charges they hit clients for while deals spin sideways.

Returning to my earlier story, I should have realized this deal was going to remain off the rails based on the initial reaction of the attorney but I'm an optimist -- what can I say?  I worked to move this forward. The attorney for the seller then began to advise his client on a number of matters directly related to the transaction (such as calling the franchise and calling the landlord). Are these typically attorney functions?  Absolutely not. What's the cost of that effort?  Roughly $250 - $400 an hour to blow up a deal.  The restaurant brokers would normally do this as part of their process.

Ultimately, as expected, this deal blew up.  The unfortunate part of the story is that both the buyer and seller were motivated to make this happen but their attorneys, in their efforts to protect them (or if I'm being cynical - charge them) led to total deal killing destruction.  The fee for both parties topped out at over $8000 with no deal ever inked.   The only money made in the transaction was by the law firms.

Are the restaurant brokers telling you not to use an attorney?  Absolutely not.  Hire an attorney but here are some tips to be sure they don't waste both your time and your money.

Tips for Using an Attorney

We are not saying it's not a good idea to use an attorney. We just recommend you manage them so they don't waste both your time and your money.

Read also,  How to Buy a Restaurant the Right Way. 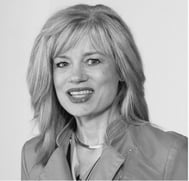