Robin Gagnon, Co-Founder and Chief Marketing Officer for We Sell Restaurants, the nation’s leading Restaurant Brokerage Franchise, was a panelist for the most recent Women’s Franchise Network Event held in Atlanta.

The topic of the event was “Maximizing your IFA Membership” and included the perspective of a Franchisor (We Sell Restaurants), the IFA (International Franchise Association), a supplier (Naranga) and a franchisee of Mathnasium and the Goddard School.

The International Franchise Association, or IFA, is the top resource for franchise opportunities worldwide.   The group represents excellence in franchising education and advocacy. Their mission, found at franchise.org is to “support your growth, connect our community, and protect our business model.  Advancing every aspect of franchising since 1960, IFA is the collective power of our membership.”

The Women's Franchise Network Atlanta posed the questions, "Are you taking advantage of your IFA membership and do you have a strategy to maximize the opportunity to network and learn from your peers in the industry.?"

The experienced panel was moderated by Ken Douglas of Social Joey, a seasoned professional with over 20 years of experience in human resources and workforce leadership and a track record of talent development and sucessful operations management.

Robin Gagnon, the Co-Founder of We Sell Restaurants and the firm's Chief Marketing Officer represented the franchisor perspective.  One of the most prolific restaurant brokers in the industry and a franchise resale specialist, she holds the Certified Business Intermediary (CBI) designation from the International Business Brokers Association and is an MBA.  She is a writer and speaker that has addressed many groups nationwide.

Leah Shimp Vass represented the IFA point of view.  She serves as Associate Director of Government Relations at the International Franchise Association. She is the director of IFA's political action committee, FranPAC. Prior to working for IFA, she was Assistant Vice President, Government Relations at CIT Group, and spent 15 years on Capitol Hill working for U.S. Senator Chuck Grassley (R-IA). Shimp Vass is a graduate of Drake University.

The franchisee perspective was shared by Indi Nandhra, the co-owner of a Mathnasium franchise with her son. She previously owned two locations of the Goddard School preschool franchise. 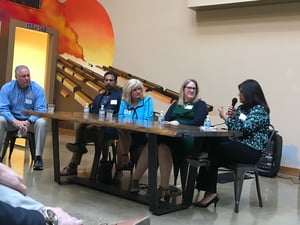 Finally, Faraz Iqbal, the COO of Naranga, represented the Supplier perspective.  A technology executive with 20 plus years of expertise, he’s has managed software application development and client services/professional services initiatives worldwide.  He is responsible for facilitating effective communication bridges between the business, sales and development teams coupled with hands-on experience in designing and developing application tools.

Questions addressed by the group included, “What is the Franchise Action Network (FAN)?  Why is it important for IFA to tell the story of franchising?”  Leah Shrimp Vass shared the importance of the annual event held in September on Capital Hill where franchisees, franchisors and suppliers do face to face meetings with representatives in the House and Senate from their state.  Their stories and direct contact resonate with legislators who are then, more attuned to the mission of overall franchising and its impact in their district.

The discussion around the annual IFA Convention focused on keynote speaker Gary Vaynerchuk, also know as Gary V and his riveting comments from the stage.  The moderator asked for feedback from the audience and panelist on the most recent convention and the responses were passionate about the keynote speech (available at this link). Robin mentioned that as a Conference Committee Member this year, there was a lot of spirited conversation around bringing Gary V’s style of personality and persuasion to the stage but ultimately, this paid off in one of the most riveting speakers in recent years.

The panel also took questions about leadership opportunities and getting involved on IFA committees.  Each contributed to a discussion of their experiences on IFA committees and the opportunity to participate.  The last discussion of the night centered on professional development opportunities and the CFE program, or Certified Franchise Executive program with the IFA.  With both CFE candidates and those who have completed the program present, there was great sharing of this experience.

The evening wrapped up with those in the Atlanta franchise community leaving with strong impressions on how to maximize their IFA Membership.