A recent discussion with a seller about the amount he wanted for his restaurant led to today’s article.  The seller, a smart multi-unit franchise owner agreed with the pricing of his business based on 2015 performance and the store was listed late in 2016.  When the next year’s financials were provided, this restaurant broker advised him that we were now overpriced.  It was clear that the business would not cash flow for lending at the asking price and was about 25% over the proper value.  This wasn’t a value judgment, it was simply a math problem with a clear answer. 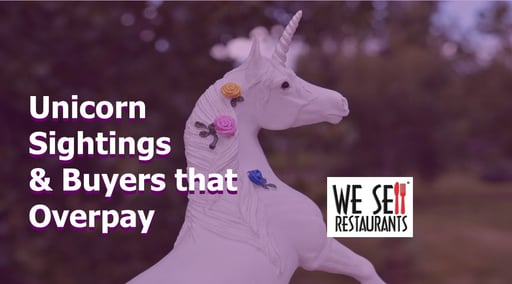 Now remember, this was not a naïve or uninformed seller.  As a multi-unit owner, he agreed that if he were buying, he would not pay this number.  However, while he knew the business was now overpriced, his plan was to simply stick with his number and wait for a buyer willing to overpay.

You can guess the next part of the story.  Multiple buyers looked at the listing.  It was a great brand.  It was in a good location.  The only issue is that sales declined between 2015 and 2016 and as a result, earnings declined by approximately 25%.  Each offer came in at the market price recommended by the restaurant broker.  Was I coaching the buyers?  No.

Then how were these buyers savvy enough to know the business was overpriced?  In the world of buying a restaurant, a lot has changed in the past decade. For sellers seeking a restaurant buyer willing to overpay forthe business, here are five reasons we can assure you those clients are just as rare as unicorns.

The first and most obvious reason that buyers are less than ever before, willing to overpay for a business is their overall sophistication and understanding of valuation. In today’s marketplace, buyers are very savvy about pricing multiples and speak the language of valuation more clearly than ever before.  When we launched We Sell Restaurants and began as restaurant brokers in 2001, it was rare to never (just like those unicorn sightings) that a buyer would have knowledge of the process for valuation and compare deals on a comparable basis.  Today’s buyer is extremely sophisticated and has a lot more access to information that helps in this process.  For that reason, finding a buyer willing to pay more than they should is not a common occurrence.

The second reason that buyers who overpay are just as frequently found as unicorns is related to bank lending.  Unlike a few years ago, bank lending is a near certainty on a restaurant with good books and records.  That means each deal undergoes valuation with the lender and they will come back with the same valuation as the restaurant brokers each and every time. Bankers don’t lend on potential.  They don’t lend on the prior year and they don’t lend on fairy tales (like unicorns).  They lend on actual results.  Businesses that are overpriced won’t make the grade.

What is the third reason that buyers who overpay are as common as unicorns?  Restaurant brokers have significantly upped their game.  The best restaurant brokers in the business have degrees in finance, experience in banking or other strong financial skills.  Unlike a decade ago, simply putting a price on a business and hoping it would sell is long gone.  Smart brokers list properly and that gives buyers the information they need to buy at the right market values.

The fourth reason that buyers who will overpay are as common as unicorns?  Buyers have seen too many listings badly priced on the marketplace and in doing their due diligence, have learned quite a bit about the valuation process.  A restaurant buyer that’s already had something in contract and walked away is an educated buyer.

The last reason for finding buyers willing to pay more than a business is worth is just as common as a unicorn sighting is the Internet.  This giant repository of data at the fingertips of anyone willing to do a simple search will return a number of articles (including ours) on valuation of restaurants for sale.  I have to admit, it will also return plenty of images for “Unicorn Sightings” so buyers should be careful not to believe everything they see online.

If you see a unicorn, grab your smart phone and get a photo!  Meanwhile, if I find a buyer willing to overpay for a restaurant, I plan to move quickly to lock him down as well.

My seller, by the way, is still waiting on someone to overpay.  I suspect it won’t happen any time soon.