Winning Tactics for Leasing a Restaurant

The occupancy costs for a restaurant are, for most of our clients, the largest fixed expense they will see on the profit and loss statement.  While labor or food costs go up or down based on sales for the year, making them variable costs, rent, will almost without exception, increase each year. Leasing a restaurant using these tactics help you to control this cost.

Use these winning tactics for leasing a restaurant written by the experts at We Sell Restaurants to control this expense.  These tactics are required at the outset, when you’re negotiating to rent a restaurant.

In the “Art of War”, Chinese military strategist Sun Tzu says, “Strategy without tactics is the slowest route to victory. Tactics without strategy is the noise before defeat.” 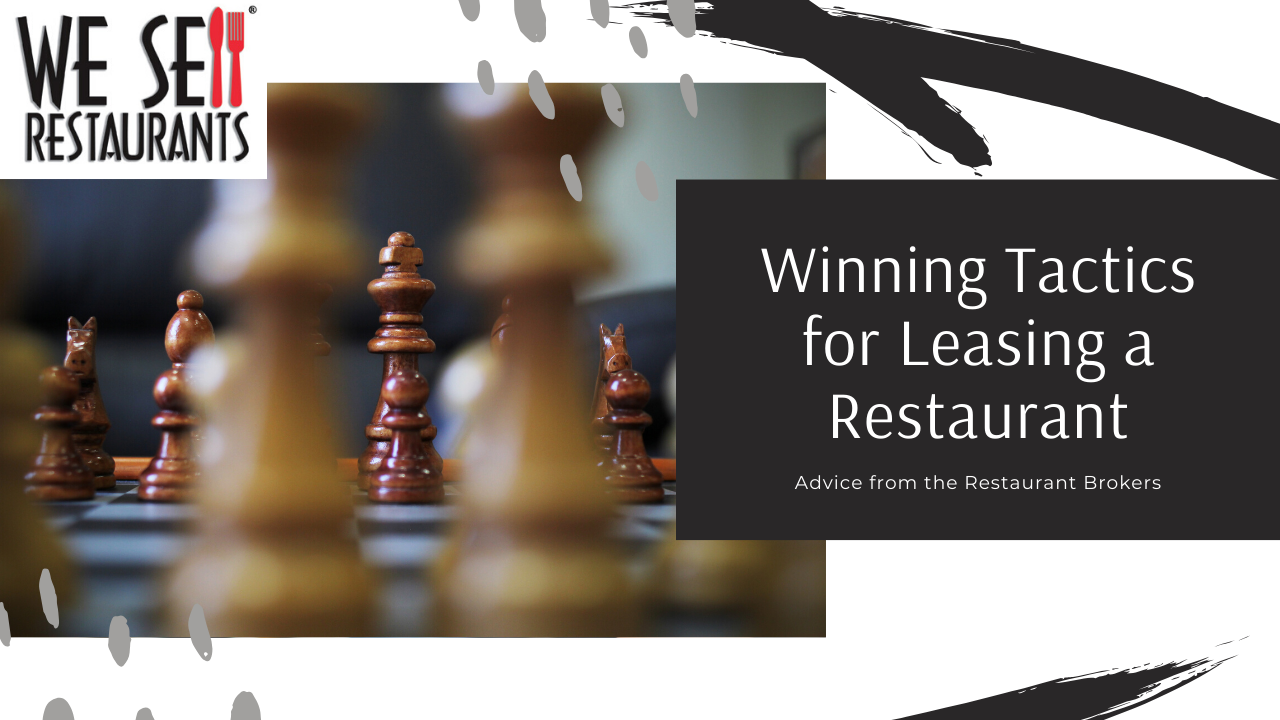 The strategy to open your restaurant is your starting point but these tactics can help you exercise control over operational costs many years into the future life of your business.

Tactic One – Keep the Fight Fair

Never represent yourself in the negotiations for leasing a restaurant.  It’s not a fair fight. Part of the landlord’s strategy is to always employ a team to assist him in the deal.  That will include, not only the representative listed on the sign, but also his attorneys and legal team.  Don’t put yourself at an immediate disadvantage by dealing with these individuals and mistakenly believing they may have your best interests in mind.

Use a trusted resource like one of our Certified Restaurant Brokers to negotiate lease terms and help you even the odds against the landlord’s team.

We’re all familiar with the term compound interest.  Essentially, this is the addition of interest to the principal sum or in other words, interest on interest.  When negotiating a letter of intent or rental rates for leasing a restaurant, avoid annual increases. Here’s why.

Instead, ask for no rent increases for 5 years and then a single 10% increase. Do the math.  This simple tactic will save you money.

Too many tenants go into a lease never expecting the business to fail or sell, both of which put you at risk for ongoing liability.  Make sure you have an exit strategy baked into the lease.  There is never a better time to ask for this than at the front end of leasing a restaurant.  At the point you want to transfer the lease to a new owner, the landlord has no interest in doing anything except keeping you on the hook for the duration of the lease.

This can be accomplished by inserting “auto approval” type clauses.  This means that if another tenant who is “approved by the franchise brand” or has a “net worth of x and cash on hand of y” they will automatically be substituted as a tenant to the lease.  This keeps you from dealing with a personal guaranty on a location now being operated by someone else.

Landlords will often “sweeten the pot” on a deal for leasing a restaurant space with tenant improvement money to help you retrofit the space.  Avoid this and ask for rent reductions instead.  TI or Tenant Improvement money is charged back to you in the rent at obscenely high rates.  You do not want an ongoing cost baked into your rent in exchange for the landlord fronting part of your construction costs.  Pay it yourself. You will pay less in the long run. Better yet, find out the maximum they will front you in TI money and tell them you want that amount offset against the rent and you’ll do the work yourself.  Then you’re using their own tactic against them when negotiating deal terms.

Tactic Five – Cap the “Other Expenses” on the Lease

The rental rate is expressed as “base rent” when you are leasing a restaurant but that’s only the starting point.  You also, generally, pay what’s known as CAMS (Common Area Maintenance Charges), Taxes and Insurance.  While these are known as “pass through” expenses, it’s a little known fact that you can negotiate these.  Ask for a cap – not to exceed a certain amount as a negotiating tactic.  Write a maximum increase each year as a percentage rate into the lease. Landlords are not as worried about spending your money as you are.  Make them accountable to run the CAMS at a reasonable rate.

These five tactics from the experts at We Sell Restaurants will allow you to win in the war of negotiations with landlords and save you money for years into the future when leasing a restaurant. For our restaurant space for lease listings, click this link.