Did a Crisis Just Prove How Well the Franchise Restaurant Model Works?

While COVID brought many industries to a standstill, it is clear that those in the hospitality industry were dramatically impacted. However, franchise restaurants fared significantly better than independent operators. In the aftermath of the immediate crisis, let’s look at the wins for the franchise community that prove just how well the franchise restaurant model works when the industry is turned upside down by a pandemic. 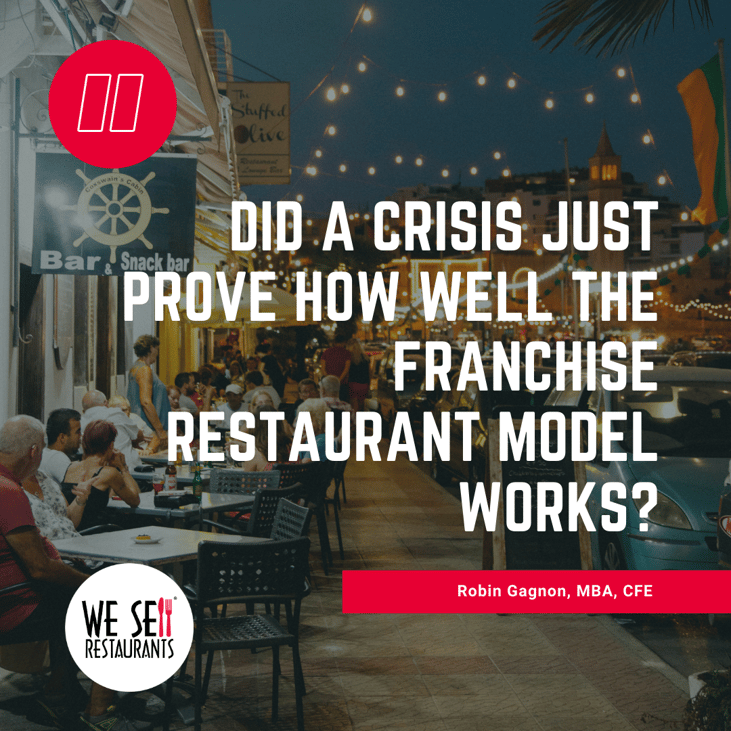 For those operating any business, time was critical, both in the early days of the crisis, and as it lingered over months. For the franchise restaurant model, the support of a major brand meant more bandwidth to cover the myriad issues facing the operators.

Funding was the most immediate need. Organizations like the International Franchise Association or IFA lobbied hard to include franchise brands in funding initiatives offered by the government like PPP. Franchisors then picked up the ball and put it across the end zone by communicating how to gain access to the funds. The best brands offered in-house training, educational webinars, and support to get needed cash in the hands of those struggling in the early days

While there is no specific data on timing, it appeared that franchise restaurant concepts were first in line for assistance and got urgent funding early due to the education and training around the process offered by their brands. For independent operators, resources like We Sell Restaurants or the National Restaurant Association were offering coaching and assistance but many were struggling to simply stay in the game and had no time for webinars when they were fighting for survival. Most were seeking answers and unsure about what was fact versus fiction when it came to applications, funding, use of funds, and repayment requirements. Inevitably, many fell through the cracks and did not get assistance to file for PPP money before it was depleted or failed to apply for EIDL loans for which they qualified.

Landlord negotiations were also critical. Franchise brands put their growth strategies on hold and instructed their real estate departments to offer recommendations to negotiate requests for rent abatement or deferrals. The independent operator was on his own to try and negotiate without the power of a large brand with hundreds of locations for support.

As Americans began to understand how and when to order out, franchise restaurant concepts were given clear direction and assistance as they cut down menu sizes to the most profitable and easiest to transport foods. The entire industry underwent an overnight transformation from dine-in to take-out. Shortage of take-out containers was an early issue with franchise restaurant brands getting better deals because of negotiated supplier contracts. This left the independent operator to figure out how to cut down a menu, box it up, and hopefully, make some money in the process.

The nuts and bolts of preparing food for take-out and delivery on a massive scale was nothing compared to the new costs associated with the shift. This is again, where size began to matter, as franchise restaurant brands negotiated sharp deals and better margins when they could deliver 1,000 doors at a time onto a platform like DoorDash or UberEATS while the independent operator simply did not have the economies of scale.

The customer shifted in seconds from customers in line to an online experience. The franchise restaurant community drew on national resources to understand the digital marketplace almost immediately and shifted ad dollars to these important channels. Reaching this customer as a single store or one that did not have the sophistication of digital marketing strategies within a trade area meant the independent restaurant simply did not have the same reach. For the independent operator, the Doordash or Uber online experience became their billboard and marketing as well as a mode of delivery.

Lastly, the voice of the customer was speaking loudly and frequently about safety surrounding their new dining experience. The franchise restaurant operator was prepared with talking points about how they were now cleaning and responding to a health crisis they had never faced before. Because of better supply chain management and resources, they also had product on hand, including sanitizing sprays for tables, sneeze guards, or plexiglass shields, while independent restaurants struggled for these basics.

Overall, the crisis hit the independent restaurants hardest with the National Restaurant Association stating that by December 1 of 2020, more than 110,000 restaurants were gone forever. Many were legacy locations that had been operating, on average, for more than 16 years. Most of these shuttered restaurants are independent, not franchise locations. It is a terrible loss for the industry and for the neighborhoods forever changed in their culinary viewpoint and diversity. Overall, there are immense knowledge and food experiences lost to us forever.

On the other hand, the franchise restaurant model proved itself to be incredibly resilient and responsive when the chips were down. For 2021, FRANdata predicts that by year-end, franchising will have recovered to 2019 levels in most metrics: business growth, employment, and economic outlook.

As I return to the original question posed by this article, "Did a Crisis just prove how well the franchise restaurant model works?"  In my book, yes. The pandemic wrought destruction throughout the industry but primarily for independent concepts. Franchise restaurants, on the other hand, looked it in the eye and never blinked. Well done.