The International Franchise Association (IFA) meeting is over and while we have returned exhausted, we are also energized by the conference aptly themed, "Franchising's Future Starts with Us." We are thrilled with the level of interactions and opportunity that We Sell Restaurants was able to uncover at the annual event attended by Robin and Eric Gagnon along with Steve Weinbaum of We Sell Restaurants.

Here are some of the highlights. 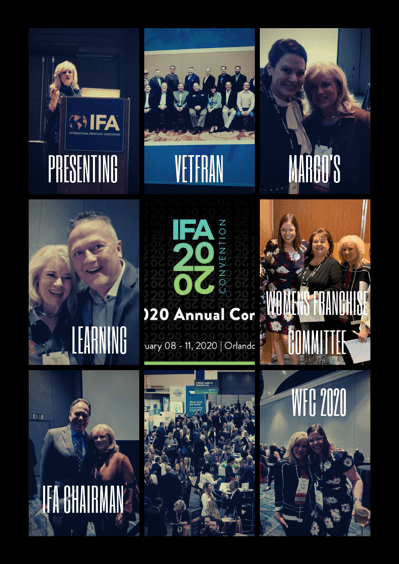 Annual Leadership Conference - Robin served on the committee for the Annual Leadership Conference which featured the award of the Crystal Compass to Paul Pickett, Chief Development Officer of Wild Birds Unlimited.  His thoughtful acceptance speech featured seven key parts of his core values he uses daily.  In addition, Dippin' Dots CEO Scott Fischer, who was recently on Undercover BOSS, shared the story of acquiring this brand out of bankruptcy with 100% debt and diversifying and building a mega brand.  Lastly, Peter Holt, CEO of The Joint Chiropractic allowed his brand to be the Case Study for teams to analyze what went right and wrong in their path to franchise growth. His statement to, "Follow your Pain" resonated with this attendee.

CFE Graduation – Robin Gagnon, Co-Founder and the firm's Chief Marketing Officer graduated as part of the Certified Franchise Executive Class of 2020.  The graduates were honored on stage at the General Session and with a pinning ceremony with the President of IFA and other notables in the room. In the picture collage, you see Robin with Shannon Iverson of Marco’s Pizza, a fellow CFE graduate who is part of the Franchise Development team for the brand.

VetFran - Eric Gagnon, President of We Sell Restaurants, is a member of the national VetFran Committee. Founded in 1991, VetFran is a strategic initiative of the International Franchise Association and the Franchise Education and Research Foundation. The group works to stand beside veterans through their transition to civilian life and entrepreneurship. Eric worked on initiatives at the conference to continue this important work.

Speaking - Robin Gagnon also developed and led a panel titled, “Raising the Value of Your Franchise through a Well-Executed Resale Program.”  Her fellow panelists were Cherry Hearn, President of Which Wich, Kitt Shipe, Franchise Attorney for Kilpatrick Townsend and Peter Baldine, President of Moran Brands.

She developed knowledge and experience from the panel to demonstrate how a well-executed franchise transfer program can increase the value of the franchisor in five critical ways:

Friends - We Sell Restaurants was able to interact and greet familiar faces like Don Fox and Brent Greenwood of Firehouse Subs, Trey Doster from Zaxby's and Charles Watson of Tropical Smoothies Cafe.  The We Sell Restaurants team wined, dined and networked for three solid days.

Education - in addition to committee meetings, the team attended educational sessions to learn the latest in franchise development, best practices and tips for restaurant franchise brands we represent in the marketplace.  Robin led a Roundtable discussion on Franchise Resales for the established franchisor that was well attended as well.  She also kept her LinkedIn feed pumping with photos and updates to the convention.

When the dust settles, we anticipate picking up several new relationships and deepening existing ones after this whirlwind convention.